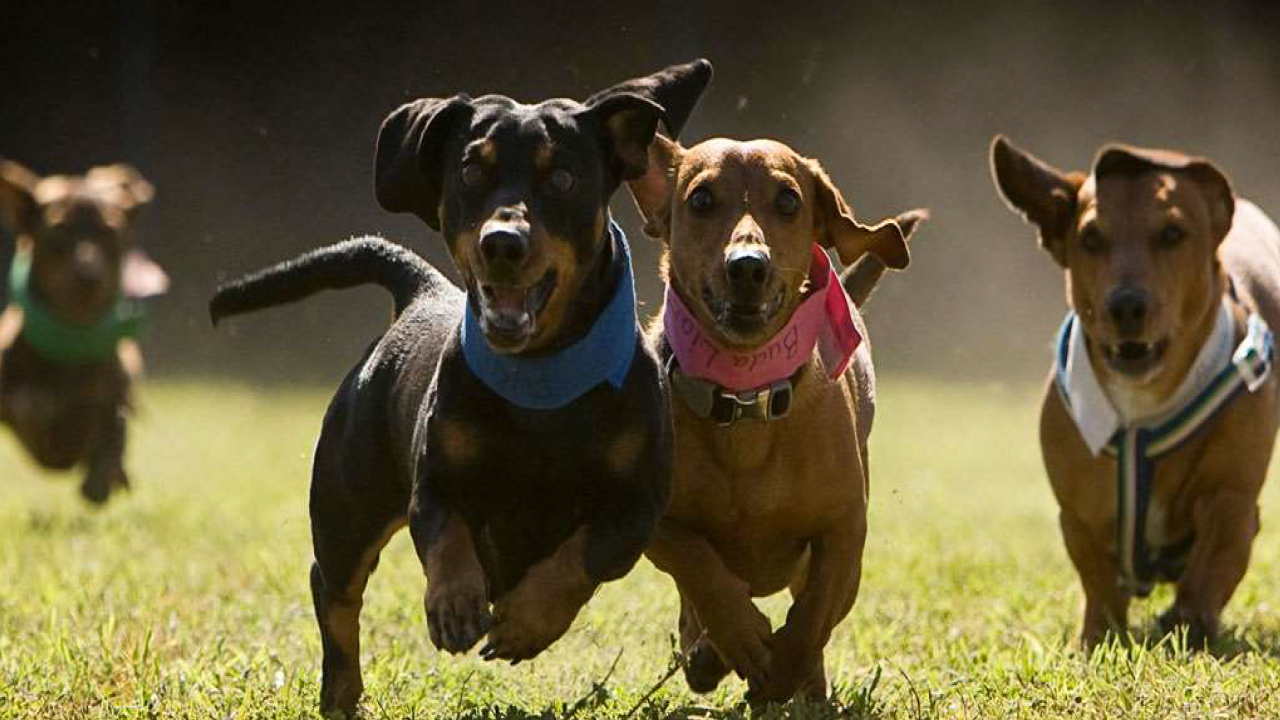 ALL participating dogs must be Dachshunds. This does not mean they have to be AKC registered, but must have the specific breed characteristics as stated by the AKC. Mixed breeds are NOT allowed. Race judges have the right to disqualify any dog if there is a question of the breed. Entries must consist of:

The number of dogs in each heat will depend on the number of entries, with a MAXIMUM of six (6) dogs per heat. Every attempt will be made to place an equal number of dogs in each heat and the number of heats will be adjusted accordingly. If there are enough dogs, minis will race against minis and standards against standards in the preliminary heats only. The contestants will be drawn for spots and heats. IF YOU ARE BRINGING MORE THAN ONE DOG PLEASE HAVE TWO HANDLERS FOR EACH DOG. YOUR DOGS MAY BE RACING AGAINST EACH OTHER IF IT IS DRAWN THAT WAY.

You MUST have with you the above mentioned items to be allowed entry in to the fair with your dog. No nonracing dogs will be permitted entrance. You will enter only through the MAIN gate not before 10:00 A.M. Saturday, September 11th. Your dog MUST be on a leash at all times while at the Fair, other than when your dog is participating in a race. Owners are required to clean up after their dog.

NO dogs are allowed in the poultry or rabbit areas at ANY time.

Before the race, a Dachshund Dash Racing Official will call all handlers and their dogs to line up for their respective heat.

Handlers:
Two (2) handlers are required per dog: one handler with the dog behind the starting line, the other handler behind the finish line to call the dog and collect him/her after the race. You will need two (2) handlers per dog because if you enter more than one (1) dog they may be drawn to compete in the same heat.

Starting Line Handler:
Dogs will be released by their handler behind a designated starting line. Handlers releasing their dog must release their dog once the Dachshund Dash Racing Official says, “Go!” Any dogs released before the Dachshund Dash Racing Official says, “Go!” will be disqualified from the race. Please allow your dog to run freely from the starting line of his/her own accord. Any owners that throw their dogs over the starting line will be disqualified and removed from the event.

Although efforts are made to allow the dogs to run freely, some dogs may still cross paths/interfere with other dogs during the race. If there is interference, the dog that is believed to have been interfered with will not have the option of racing in another race or be placed higher in the finishing results. The place that the interfered dog finishes is its official place.

Finish line handlers may only use a calling voice to coax their dogs. Loud noisemakers, live animals, snacks, newspapers, bags, squeaky toys and anything deemed to be disruptive to other dogs will not be permitted. In order to be declared the winner, all four (4) paws must cross the finish line.

For the safety of the dogs, handlers are not permitted to leave their designated places while the dogs are competing.

Once the first dog has crossed the finish line (with all four (4) paws), the finish line handlers of the other dogs need to continue to call their dogs until all dogs are with their respective owners. If your dog does not come to you within a reasonable amount of time after the finish of the race (determined by the finish line Dachshund Dash Racing Official), you will be allowed to enter the course and collect your dog. Please be careful, and do
not interfere with anyone else’s dog.

The winner of the Dachshund Dash Races Championship Heat and his/her owner and handlers will come to the
front of the Stage for photos and a short interview following the race.